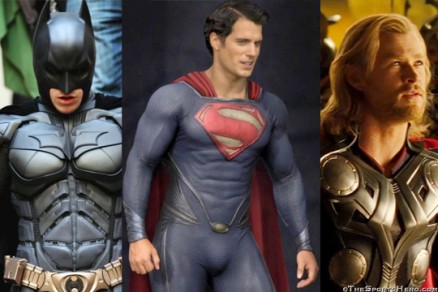 I decided to take a little break from writing about ‘THE DARK KNIGHT RISES’ to explore an issue that has always nagged at me when it comes to movies, and namely superhero movies: parents.

Parents play a major role in comic books.  Without Jor-El and Lara there’d be no Superman, and without Thomas and Martha Wayne there’d be no Batman.  I’m not just talking about the sex aspect here, either.  If Jor-El hadn’t sent his only son to Earth then we would have no Superman to defend us.  Without the tragic deaths of the Waynes, Gotham would never have had the Dark Knight to defend it.

So as important as a superhero’s parents are in comics, I feel they should be given the same importance when it comes to portraying them on the big screen.  While studios may look to just cast big names for these roles, I’ve always been curious if they ever consider whether people would believe that the two actors playing the parents could have a kid who looks like the main actor.

I decided to look at three actors from upcoming superhero films–Chris Hemsworth, Henry Cavill, and Christian Bale–and the actors cast as their parents to see if there would be any resemblance.  Using www.morphthing.com, I morphed the photos of the actors playing the parents to see if their offspring would look anything like their superhero sons.  While the results aren’t precise and require a great deal of imagination, it offers some food for thought.

Anthony Hopkins was the perfect choice for Oden in ‘THOR.’  Not only is he a great actor, but a guy with a beard and an accent having a son with a beard and an accent isn’t hard to believe.  Hopkins and Chris Hemsworth had a great father-son relationship on screen, but I was curious to see if Hopkins and Rene Russo would have a kid who looked like Hemsworth.  Take a look at the results below. 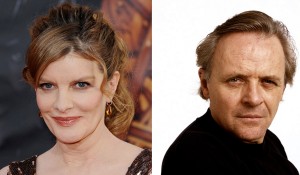 Looks like nothing more than a feminine version of Anthony Hopkins.  Regardless of the bad morph job (or MJ for you pervs) I still don’t think a Hopkins-Russo spawn would resemble Chris Hemsworth in any way.  Believable parents onscreen, but biologically, no.

Henry Cavill lost out on the role of Superman back in 2005 after Bryan Singer cast Brandon Routh for the lead in ‘SUPERMAN RETURNS.’  Thankfully for both Cavill and us, that debacle led to him being cast as the Kryptonian in next summer’s reboot, ‘MAN OF STEEL.’

While we don’t know much about the movie’s story yet, we do know that it will show Krypton and Superman’s parents, Jor-El and Kara, played by Russell Crowe and Ayelet Zurer, respectively.  I loved the casting of Crowe as I think he’ll fill the shoes of Marlon Brando nicely, and while Zurer seemed like a curveball, the more I thought about it, the more I liked it5.  I ran their picture through the morpher and here’s what I got. 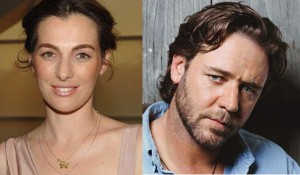 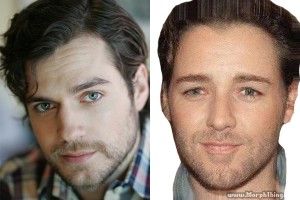 While it looks more like a masculine version of Blake Lively, I can definitely see how Crowe and Zurer’s kid could end up looking a bit like Henry Cavill.  If nothing else, the pictures of Crowe and Cavill above look strikingly similar by themselves.

While the image of Bruce Wayne’s parents may never be far from his mind, it wouldn’t be surprising if some of you, if not many, have forgotten what his parents actually looked like in ‘BATMAN BEGINS.’

Thomas and Martha Wayne were played by Linus Roache and Sara Stewart.  They may not be the most recognizable actors out there, but they played their parts well, and it wouldn’t surprise me if we saw them again in TDKR, whether in a flashback scene or even a photo in Wayne Manor.  We know there is a rumored scene that takes place at the family graveyard next to the manor, so even that could be a way for us to see them again in some capacity. 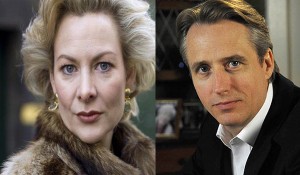 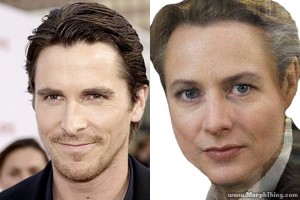 Aside from a similar hairline, I’d say no.  The offspring of Crowe and Stewart might, but not Loache and Stewart.

While none of the morphed photos yielded anything even remotely close to a match, and while I’m starting to realize just how much time I wasted morphing them, I definitely hope it got you thinking about the casting of parents in these superhero films…though probably not.