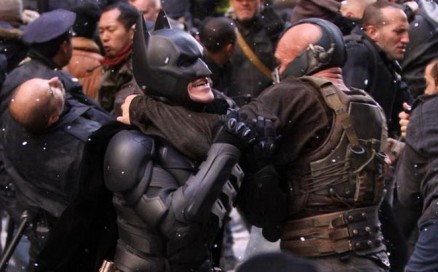 Over the past few weeks, I’ve presented articles debating whether or not Miranda Tate will be Talia al Ghul in THE DARK KNIGHT RISES and if Joseph Gordon-Levitt’s John Blake could actually be Robin.  Now, we’ve come to the main elephant-in-the-room question regarding TDKR: Will Batman Die?

It’s tempting for us as fans of Nolan’s Batman films, and fans of Batman in general, to dismiss this question immediately.  After all, how could Nolan get away with killing Batman, one of the most beloved comic book icons of all-time?  It’d be unprecedented.  And, while his Batman films have a darker, edgier tone than any of its predecessors, this is still a movie that has to appeal to a mass audience of varying ages.  I don’t know how young kids would react to seeing their favorite hero die on screen.

Putting aside my general bias and childlike admiration for the Dark Knight, I started to think about this question in terms of how it applies to Nolan’s Batman universe.  Nolan would not just kill Batman for the sake of killing him.  There’s a reason and purpose behind every action and decision Bruce Wayne has made in the first two films.  If Nolan were to kill Batman in TDKR, then there has to be a justifiable reason for him to do so.  I’ve come up with three reasons why I think Nolan might choose to do this.

YOU EITHER DIE A HERO…

“…or you live long enough to see yourself become the villain.”  I feel that this quote from Harvey Dent in THE DARK KNIGHT will be a major theme throughout TDKR.  We know from set photos that Bane will be holding up a picture of Harvey Dent at some point, and that Dent’s name and reputation are still prevalent in Gotham eight years after his death.  Although Dent died a hero in the eyes of Gotham, we know that he succumbed to the Joker’s ways and went on a killing spree that saw him become a corrupt and murderous politician.  He became a villain.

At the end of TDK, Batman selflessly took the blame for Dent’s victims and forced Gordon to make him a fugitive in order to portray Dent as a true hero to the people of Gotham.  With eight years having elapsed between TDK and TDKR, Bruce has lived long enough to see Batman become a villain to Gotham, so when he returns to save the city from Bane, wouldn’t dying as a hero ensure he’ll never risk being portrayed as a villain again? 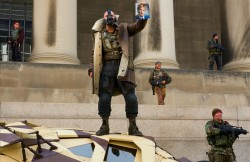 There’s also the matter of sacrifice.  Many people have died as a result of Batman’s crusade against the criminal underworld and the corruption plaguing Gotham.  While Harvey Dent died fighting for the Dark Knight’s cause, the most notable casualty in Batman’s war on crime was Rachel Dawes, his childhood friend and the one woman we know he loved.

BRUCE: “Did I bring this on her?  I was meant to inspire good, not madness, not death.”

ALFRED: “You have inspired good.  But you spat in the faces of Gotham’s criminals.  Didn’t you think there might be casualties?  Things always get worse before they get better.”

ALFRED: “ Rachel believed in what you stood for…what we stand for.  Gotham needs you.”

Rachel died fighting for what Batman believed in.  If push comes to shove in TDKR, will Batman be willing to sacrifice his own life in order to save Gotham?  Well, as Bruce told Alfred in TDK, “Batman has no limits.

Let’s not sugarcoat it, in TDKR Gotham is going to get seriously fucked.  Not “Man-Dressed-As-A-Clown-Blowing-Shit-Up” fucked.  No, we’re talking “Potential-Nuclear-Type-Attack-Destroying-Gotham-As-We-Know-It” fucked.  Based on a description of a scene involving Catwoman that appeared in the Los Angeles Times in December, we know that Gotham will be on the verge of destruction upon Bane’s arrival.

Take a look at this excerpt from the article:

“Gotham City is a war zone. A ruthless madman named Bane has ripped away any sense of security and the citizens, haggard and clutching suitcases with refugee anxiety, sit behind barbed wire waiting to see what will blow up next. A hooded prisoner is dragged in – it’s Bruce Wayne, one of Gotham’s most famous faces.”

Not only is Gotham on the brink of destruction, but Bruce Wayne has found himself caught up in the mess with the rest of Gotham’s citizens.  We know that at some point in TDKR Bane will discover Batman’s true identity, and assuming Bane doesn’t reveal this information to the rest of Gotham, there’s only one way to ensure Batman’s identity never becomes public: Bane has to die.

I don’t think there’s anyway of getting around this.  Bane will turn Gotham into a war zone, according to the description above.  If he can strip people of their sense of security and lock them up behind barbwire, then something tells me he’s not the kind of guy who will go quietly and surrender if you throw a pair of handcuffs on him.  This is a man with a plan.  Just take a look at his strike zone map below. 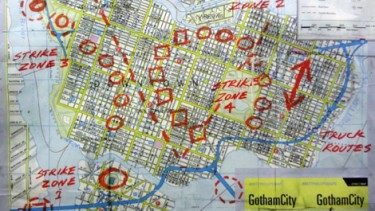 The only way for Bane to truly be defeated, and for Gotham to regain any sense of stability is for him to die, thereby eliminating the perpetual fear of his return.  He’s too powerful and influential to keep alive, and I’m not yet convinced that simply removing his mask will kill him.

But if Bane dies, I believe Batman will die along with him.  Based on my theory about the ending of the movie, I believe Batman will face Bane a final time with the full knowledge that this confrontation could likely be his last.  If Batman knows he’s going to die, his one goal will be to ensure Bane doesn’t destroy Gotham.  Does this mean Batman will break his only rule?  Not necessarily.  We could have another Ra’s-al-Ghul-Batman-Begins scenario on our hands, where Bane dies as a result of his own plan/machine and not at the hands of the Dark Knight.

THE MAN, THE MYTH, THE LEGEND

I saved this section for last on purpose.  This whole article has been about trying to justify why Batman could die in TDKR.  But by Batman, I don’t necessarily mean Bruce Wayne.  I’m talking about just the Dark Knight.

We know that TDKR will be incorporating themes from Frank Miller’s graphic novel, BATMAN: THE DARK KNIGHT RETURNS.  In that, Batman fakes his own death at the end and goes on living as Bruce Wayne in a cave; training new recruits to defend Gotham in place of Batman.  Could Nolan do something similar?  Maybe Batman trains a replacement (John Blake?) or maybe his actions and sacrifice finally inspire the law enforcement in Gotham to step up in his place. 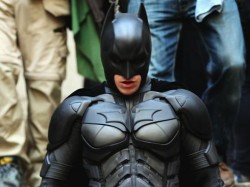 In Miller’s novel, which saw Bruce Wayne return as Batman after 10 years of retirement as opposed to eight in TDKR, a Gotham news station acknowledges the ten year anniversary of the last known sighting of the Batman, and says that many people in Gotham now believe he was just a myth.  This could very well be the case in TDKR.  Keep in mind, TDK took place roughly six to nine months after BATMAN BEGINS, so Batman’s tenure in Gotham up until his return in TDKR has been less than a year.  It’s not a stretch to believe that some in Gotham may have forgotten about Batman entirely, or at the very least view him as nothing more than an urban legend or perhaps even a political creation concocted to help inspire the city and sway some voters.  If a child in Gotham was born right after the events of TDK, he would’ve grown up in a world without Batman (for eight years)!

Assuming Bruce Wayne doesn’t die, but Batman does, I feel his death would be the perfect way to tie Nolan’s films three films together and bring a definitive, and satisfying, conclusion to the Dark Knight legend.  One reason I feel this way is because of the scene in BATMAN BEGINS when Bruce is flying back from China with Alfred and describing his intention for becoming a symbol of hope for Gotham.

“People need dramatic examples to shake them out of apathy, and I can’t do that as Bruce Wayne. As a man, I’m flesh and blood. I can be ignored, I can be destroyed. But as a symbol … as a symbol, I can be incorruptible. I can be everlasting.”

Bruce knew from the beginning that he needed to become something more than just a man in order to inspire the city and initiate change.  If Batman, the man, were to sacrifice himself to save Gotham in TDKR, a city that shunned him and hunted him, wouldn’t the people finally see him as a hero and understand what he was fighting for?  It’d give us a chance to potentially see how his legacy lives on in Gotham well after his death.  I feel it would be much more satisfying to see how Batman’s legacy lives on and inspires Gotham after his death than to see him just walk away into the sunset.  And remember this, Harvey Dent’s death inspired change and peace in Gotham that lasted for eight years.  What sort of change would Batman’s death inspire?

We have no idea what Batman’s fate will be at the end of TDKR.  It is extremely rare, if not unprecedented, for a comic book icon as big as Batman to die in a major film.  But within the confines of Nolan’s Batman universe, killing Batman is not only a realistic possibility, but it would actually serve a purpose.  The whole reason Bruce Wayne took up the mantle of Batman was to inspire the people of Gotham and show them they have the power to change their city for the better.  He wanted Batman to become a symbol, one that would live on and continue to inspire well after the man inside the suit was gone.  If his death achieves this, then Batman’s goal, and Bruce Wayne’s overall character arc, will be complete.