Last week, ESPN.com and the TrueHoop Network ranked LeBron James as the number one player in the NBA.  It’s hard to argue against that, considering James averaged 26.7 PPG, 7.5 RPG, and 7.0 APG last season.  Plus, the guy already has two MVP trophies in his case, both earned before he even turned 26.

A few days prior to the announcement of LeBron’s ranking, Hall of Famer, Magic Johnson, speaking at the University of Albany, couldn’t help but poke fun at James’ fourth quarter playoff troubles during last year’s Finals by saying, “There’s going to always be great players in basketball.  There’s going to always be guys who win championships in the NBA, except LeBron…”

While Johnson claims he was only kidding, the mere fact that LeBron has now become the subject of such jokes and ridicule after garnering so much praise and attention during his years in Cleveland has led me to wonder who this guy really is.

While pondering what category LeBron falls into, I came to the realization that his current identity crisis is virtually parallel to that of another famous icon: Bruce Banner, a.k.a. The Incredible Hulk.

LeBron is the Hulk.  He can call himself King James, the Chosen One, or anything else he wants, but he’s the Hulk.  No ifs, ands, or buts about it.  Aside from being physical freaks of nature, both James and his not-so-jolly green counterpart have been portrayed as both heroes and villains by the public.

Villains?  Fuck ‘em.  We want them to fail, and as devious as it may sound, we get almost as much pleasure, if not more, at watching them fail than seeing a hero succeed.

For both Banner and James, their ultimate undoing all started, in part, because of their egos.

Dr. Banner started out as the best scientist in his field.  His work was unparalleled, and he pushed the boundaries of science.  Like James, there seemed to be no equal to Banner.  He was so confident in his work and knowledge that he experimented a radiation-healing machine on himself by sitting in a high-tech lab chair of his design.  But to Banner’s surprise, the experiment failed, and he ended up being exposed to a massive amount of gamma radiation that ultimately transformed him into the Hulk.

LeBron sitting in that chair in the Boys & Girls Club in Greenwich, CT on July 8, 2010 was the equivalent of Banner sitting in his high-tech lab chair, and whereas Banner got hit with a high-dose of gamma radiation, James’ gamma radiation came in the form of Jim Gray opening his mouth and asking, “LeBron, what’s your decision?”

The moment LeBron responded with the now infamous, “I’m going to take my talents to South Beach,” his transformation into the Hulk was complete, and like Banner, the only thing the world saw now was a monster.

As the Hulk, Banner had to flee from town to town, running and hiding across the country to avoid being caught.  It took time, but Banner eventually started to come to terms with who, and what, he had become.  Despite the labels given to him by the public, Banner remained steadfast in his quest to find a cure.  The only opinion that mattered to him was his own.

For LeBron, it wasn’t so simple.  He was a public figure, his every step and move post-Decision now under the microscope of public criticism.  He was hated now.

While LeBron likely anticipated some hostility from Cleveland fans, it was clear when Jim Gray showed him footage of the streets of Cleveland shortly after his announcement that he hadn’t anticipated just how bad it would be.

In Cleveland, people were screaming in bars and burning LeBron jerseys in the streets.  Throw in a couple of pitchforks and some toothless gypsies with warts, and you had yourself a good ole fashioned “Fuck Frankenstein” riot on your hands.

The veil had been lifted.  People felt LeBron had publicly humiliated Cleveland on national television, and that that was the real LeBron James: selfish, egotistical, and now, a villain.

In the days and months following LeBron’s decision to go to Miami, news outlets across the country wrote stories about his transformation from a hero to a villain, and for a short period of time last season, LeBron, himself, tried to embrace his new villainous role, even going so far as to make a commercial about it.

But it didn’t take much for people to realize LeBron was not happy with being labeled as a villain.  He’d been showered with praise since before he was a high school star, and upon entering the NBA he was hailed as the next Michael Jordan, the player who epitomized greatness.

It appeared as though LeBron hoped that time would heal all wounds, and that if he could win an NBA title with Miami, it would silence his critics and again make him the hero everyone loved.

But after the Heat lost in the NBA Finals last June to Dallas, it was clear from the perverse delight people took in LeBron’s failure to win a championship that he was still a true villain in the eyes of the public.

It was clear, too, that LeBron was hurt by this.  He didn’t know how to handle it.  Being hated was unchartered territory for him.  He was public enemy number one, and it was starting to get to him, which became evident in his post-game press conference after the Heat lost the Finals and LeBron made some mean-spirited comments about the fans who’d been rooting against him since he left Cleveland.

EMBRACING THE MONSTER WITHIN

The Heat had lost.  LeBron had failed.  The critics came out in droves, and whether LeBron wants to admit it or not, he heard them loud and clear.

LeBron can feel sorry for himself all he wants, but the fact of the matter is, he needs to stop hanging his head and worrying about what other people think of him.  The Earth Institute just announced that the world’s population will hit 7 billion by the end of this month, and chances are, there are going to be some out of those 7 billion who just plain don’t like him, and never will.

And if it bothers him?

When the Hulk is on a rampage, do you think he stops to think about what he is doing or what people are saying about him?  Of course not!  He just screams, “HULK SMASH!” and fucks shit up. 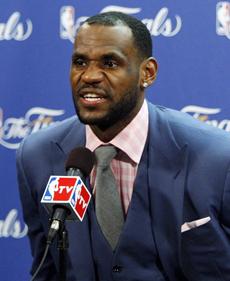 James made some not-so-heroic comments about fans after the Heat lost in the Finals.

LeBron has to have that same mentality on the court and ignore everything going on off of it.  Like the Hulk, he has to come to terms with who he is now, and forget about the past, and any preconceived notions he had about his public image.  Not only does James have to stop caring about what other people think, he has to stop worrying about being liked by other players in the league, too, something I feel has been keeping him from reaching his true potential.

LeBron is a physical freak, a once in a lifetime player with the rare combination of size, strength, and speed.  He needs to take advantage of that.  In the Finals, LeBron posted up little J.J. Barea, but settled for a jump shot instead of taking it to the rim.  Why this guy is taking jump shots ever is beyond me when he clearly has the strength and ability to get to the basket at will.

Bruce Banner once said the scariest thing about losing control and turning into the Hulk was that he liked it.  LeBron has to be the same way.  He needs to let himself lose control on the court and, like the Hulk, fuck shit up.  Knock someone’s teeth out with an elbow going to the rim, jump over them and slam the ball into the hoop and shout, “LEBRON SMASH!”  Make them fear you, not like you.

The Hulk and LeBron may want to be viewed as heroes, but no matter how hard they try to be accepted or liked, the public appears steadfast in their opinion of each.   Bruce Banner has seemingly come to terms with his new life, and LeBron needs to follow suit.  LeBron needs to embrace the monster he’s now portrayed as and take it out on the court.  He has to realize that he’ll never be the hero and untouchable icon he wanted to be, no matter how hard he tries, but if dominates the game the way he is capable of, people will start taking notice.  Let your game doing the talking for you.

It’s definitely not an easy path to walk, but LeBron needs to deal with the backlash and criticism he created for himself.  He needs to accept it, press forward, and rise above it.  He has to overcome.  After all, isn’t that the path of a true hero?