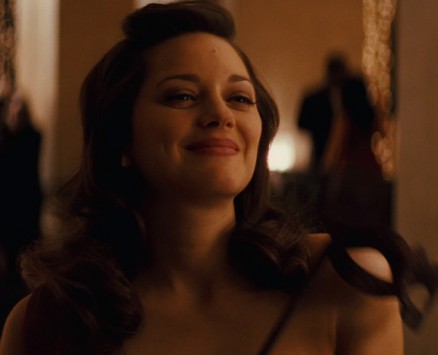 EDITOR’S NOTE: THE FOLLOWING MAY BE CONSIDERED A POTENTIAL SPOILER.

You know the name.  She’s Marion Cotillard’s character in THE DARK KNIGHT RISES.  She’s said to be “a Wayne Enterprises board member eager to help a still-grieving Bruce Wayne resume his father’s philanthropic endeavors for Gotham.”  At least, that’s what the official announcement by Warner Bros. stated when she was cast last April.

Since that time, the Internet and rumor mill have been abuzz about whether or not Cotillard’s character of Tate is who we’re told she is.  After all, why would an Oscar-winner take on such a small, seemingly insignificant role in the final chapter of Christopher Nolan’s epic trilogy?  Forget the fact that they worked together on INCEPTION.  Regardless of the professional relationship and respect Nolan and Cotillard share for one another, I don’t think she’d take on a role as one-dimensional as a board member and potential love interest unless there was something else that attracted her to this role—something deeper.

You know what I’m getting at by now, and if not what are you doing here?!

I’m of course talking about Talia al Ghul, who in the comics is the daughter of Ra’s al Ghul, portrayed by Liam Neeson in BATMAN BEGINS.

Since her casting, Cotillard has repeatedly denied reports that Miranda Tate is just a cover for her real character name of Talia al Ghul.  She claims her character is not based off the comics and swears she is telling the truth.  Yet, many people still question whether or not she is Talia.

Below, I debate both sides of the argument, giving reasons why she can’t be Talia and reasons why she can.  In doing so, I may have also uncovered an important detail I overlooked in the last trailer, and that detail may impact your decision on whether or not to believe Miranda Tate is Talia al Ghul.

What would Nolan gain by hiding Talia’s true identity from us?  Keep us speculating further about what the plot of the movie will be?  I don’t think there’s anything to be gained or lost by not telling us whether Talia is in this movie or not.

Gary Oldman has also hinted at another Batman villain being in this film, saying “I think it’s a villain from one of the old, old, from way back from the old comics.  It is a Batman villain.”  Talia al Ghul didn’t make her first appearance in the Batman comics until 1971, and since Batman’s been around since 1939, I wouldn’t necessarily classify Talia as “one of the old, old” villains.

Not only that, but when you go back to BATMAN BEGINS and look at the scene between Ra’s al Ghul (a.k.a. Henri Ducard) and Bruce talking

around a fire, Ra’s says to Bruce, “I wasn’t always here in the mountains.  Once I had a wife.  My great love.  She was taken from me.”  So, he talks about his wife, but not his daughter?  Granted, TDKR was written years after BATMAN BEGINS, so maybe they didn’t anticipate using Talia in any film, but I feel Nolan is smart enough to investigate the mythology of a character before using them.  Therefore, not having Ghul/Ducard mention a daughter seems like a major oversight.

Speaking of Ra’s al Ghul, we know now that he’ll be making an appearance in this movie. Josh Pence has been cast to play a young Ra’s al Ghul, and Liam Neeson was reportedly spotted on set for a day, too.  Just because Ra’s is in this movie that doesn’t mean has daughter has to be, too.  There is the theory that Ra’s raised and trained Bane, so that seems like the more plausible scenario.

I know you will argue that those set photos of Miranda Tate getting into a Tumbler is undeniable proof she’s Talia (see photos below).  I don’t deny that she’s likely a part of the League of Shadows, but it’s more likely she’s a love interest of Bane’s than Talia al Ghul.

Come on.  It’s so obvious Miranda Tate is Talia al Ghul.  It’s probably the worst kept secret in Hollywood since Shia LaBeouf’s character in INDIANA JONES AND THE KINGDOM OF THE CRYSTAL SKULL turned out to be (surprise!) Indy’s son.  As I stated earlier, I don’t think Cotillard would have signed onto this project unless there was more to her character than just a pretty face.  Plus, take a look at the pictures below. 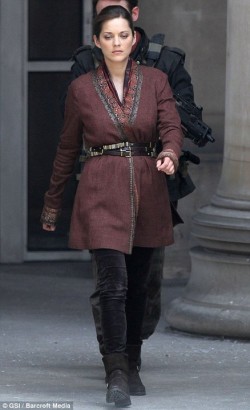 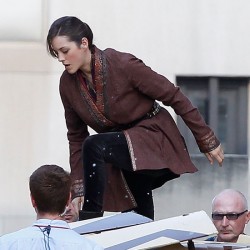 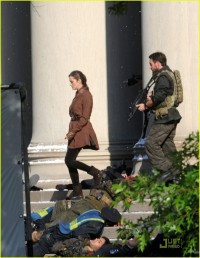 How much more evidence do you need?  She’s walking with Bane’s men, getting in one of the camouflaged Tumblers and wearing what looks to be some sort of far-Eastern piece of clothing.  Doesn’t seem like the typical piece of garment one would have in their wardrobe.  Plus, it looks more like Bane’s men are escorting her rather than holding her against her will.

We also know from the trailer and these pictures that Bane and his men get their hands on a pair of Tumblers.  Who better to grant them access to Wayne Enterprises’ trove of gadgets than a member of the board, who also happens to be the daughter of the man Batman killed (or didn’t save)?

I went back and examined the recent trailer again and I feel confident I’ve found proof Miranda Tate is Talia.  Also, there may be a reason we find this out at the end.

When we look at the scene in the trailer with Bruce and Miranda at the masquerade ball (the 1:36 mark) we see that Bruce is holding a cane, meaning this scene likely takes place well after Bane beats the shit out of Bruce/Batman.  The fact that he is talking to Miranda and smiling probably means he doesn’t have any idea who she really is yet.

I looked at the pictures of Talia Miranda getting into the Tumbler and noticed the large pillars she’s walking past and concluded this has to be after the major fight scene on the steps of the courthouse (again, I’m just calling it a “courthouse” for the sake of this argument).  Notice all the dead bodies at her feet?

We even see at the end of the trailer (the 1:47 mark) a Tumbler firing at the courthouse, so it matches up.  This means that this is probably the point where Batman finally finds out that Miranda is Talia.

My theory is that this realization/discovery scene by Bruce will take place at the end of the movie, possibly even as the climax.  What leads me to think this?  Take a look at the two pictures below. 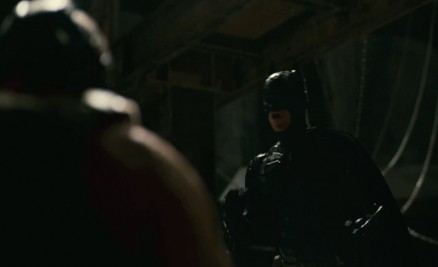 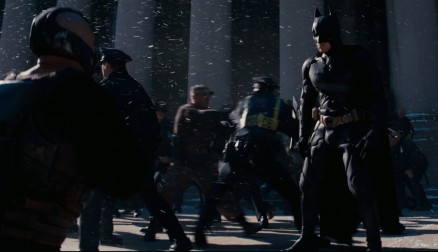 The first one (top) comes courtesy of the teaser trailer from last summer.  It’s the scene where an exhausted and defeated Batman is backing away from an approaching Bane.  Look at the way Batman is standing.  Despite the look of exhaustion and defeat on the face of the Dark Knight, he’s still able to maintain his fighting pose: right leg back, left leg forward.

Yet, in the image from the latest trailer (bottom), we see Batman waiting at the top of the courthouse stairs as Bane approaches.  Take a look at the way Batman’s standing: it looks like feet shoulder-width apart.  If his right leg is injured (as we know it will be based on seeing him holding the cane in his right hand earlier in the trailer) then he’ll be favoring that leg more, not putting as much pressure on it as before his injury.  This mean’s Batman will have to change his fighting stance, hence why he’s facing Bane the way he is.

Another reason I think this scene comes at the end of the film is because of the shot in the trailer of the Batwing chasing the Tumblers down the streets of the Gotham (the 1:51 mark).

There are no cars on the street anywhere!  Then again, I don’t know what the street cleaning schedules are in Gotham.

Now I don’t care who you are or where you’re from.  All I know is, wherever there’s a Saks Fifth Avenue, there’s a crowd.  They don’t put Saks on side streets or back alleys.  They put them in prime, commercial locations where they’ll get the most attention and draw the biggest crowds.  Take a look at the picture below taken from Google Maps that shows Smithfield Street in Pittsburgh, the street where this scene was filmed.  Notice all the cars and people?

But take a look at the first picture from the trailer: there’s not a single person in sight, either.  This leads me to believe that Gotham has been evacuated/abandoned and only a handful of people remain.  As I’ve said before, if TDKR plays off the BATMAN: CATACLYSM storyline in which an earthquake devastates Gotham and plunges it into chaos (i.e. the machine Bane uses to collapse the football field will also be used around various “strike zones” in Gotham) I believe power and electricity in the city will be scarce to nonexistent.  Therefore, it makes sense to have the climax of the movie take place during the day when we can actually see everything.  If the climax is at night (yes, I said “climax at night,” can we move on now?) in a city with no power and no lights, what fun will that be?

So, based on the pictures of Miranda Tate getting into the Tumbler, coupled with some more analysis of the actual trailer and when I believe the ending will take place, I have to conclude that Marion Cotillard is in fact playing Talia al Ghul.  The only way she can swear her character is original or claim it’s not Talia is if Nolan decided to change the spelling of ‘Talia’ or give her a different name.

Again, this is all just speculation based on the trailer and set photos.  Only time will tell if any of it is true, but one thing is certain: this movie is going to be amazing.

After hearing the arguments from both sides, what do you think?