From bust to hero, Alex Smith’s journey to NFL success took a long and unconventional route.

A nuisance to his city.

What Batman was to Gotham City when he first appeared, so too was Alex Smith to the people of San Francisco after being drafted first overall by the 49ers in 2005.

Smith came to the Niners after a stellar career at Utah under then-head coach, Urban Meyer.  He finished his three-year collegiate career with over 5,000 yards passing, 47 touchdown passes, and a 21-1 record as a starter.

But Smith had played in a high-powered spread offense at Utah, a system that rarely (if ever) translates at the NFL level.  Smith also had to carry the burden of being selected over hometown boy and local Cal Bears QB, Aaron Rodgers.

So, for a city whose team was coming off a 2-14 season, Smith’s arrival seemed to bring with it more questions about his NFL-capability than answers, and his injury-plagued rookie year did little to squash them.  Smith finished the 2005 season with just one touchdown pass and 11 interceptions in just nine games.

In his first four years with the Niners, Smith went through four different offensive coordinators and eventually lost the starting job to Shaun Hill before the 2008 season, a decision that led many to label Smith as a “bust”.  To make matters worse, Smith was placed on injured reserve the day before the season opener due to a broken bone in his shoulder.

At the time, then-Niners general manager, Scott McCloughan openly stated the team expected to release Smith before the start of the 2009 season, when his salary would be $9,625,000.

McCloughan’s statement essentially confirmed what everyone had been thinking: that the Niners made a mistake by taking Smith first overall in 2005.  And, for a franchise that’s boasted such legendary names as Montana and Young, it seemed only fitting that a quarterback-bust would have the most generic and simple surname in America: Smith.

But, after a head coaching change in 2008, Smith’s contract was restructured and he was brought back for the 2009 season under new coach Mike Singletary.  Despite losing the starting job again to Hill, Smith took over in Week 7 against Houston, going 5-6 the rest of the season as a starter.

In 2010, Smith was again taken in and out of the starting lineup in favor of former Heisman Trophy winner, Troy Smith.  So, it again came as a surprise when the Niners decided to re-sign Smith to a one-year deal in the offseason, especially after drafting Nevada quarterback, Colin Kaepernick in the second round of the 2011 draft.

Smith and the Niners entered the 2011 season with a new head coach in Jim Harbaugh, and for Smith, his seventh offensive coordinator in as many seasons.  The Niners were expected to finish near the bottom of the league, and some speculated we could see a reunion between Harbaugh and his former college quarterback Andrew Luck, the projected number one pick in the 2012 draft.

Still, Saturday was the day when Alex Smith grew up right before our very eyes.

For the Niners, it was their first playoff appearance in a decade and despite ranking in the top five in total defense this season, few experts gave them a chance against the Saints’ offense.

A failed two-point conversion meant the Saints could win the game with a touchdown, and after Drew Brees hit Jimmy Graham for a 66-yard touchdown pass with just 1:37 left in the game to take a 32-29 lead, it appeared as though the Saints were going to do just that.

But, Smith had other plans.  He found Davis for a 47-yard completion and then connected with Frank Gore to give the Niners third down on the Saints’ 14.  A field goal was all the Niners needed to send the game into overtime, but with nine seconds left, Smith took a shot at the end zone and found Davis for the touchdown and a 36-32 win. 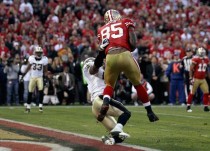 The once-labeled “bust” orchestrated a game-winning drive that included a 47-yard completion to Davis and culminated in a 14-yard strike to the tight end in the end zone with nine seconds left that would give the 49ers a 36-32 victory over Drew Brees and the red-hot Saints. Now, the Smith-to-Davis touchdown will live on in 49ers lore along with Montana-to-Clark and Young-to-Owens.

But, the story of the game was Alex Smith. In leading his team to victory, Smith helped the Niners become the first team in NFL history to score two lead-changing touchdowns in the final three minutes to win a playoff game, according to STATS LLC.

On Saturday, the Niners quarterback grew up right before our eyes.  The years of injuries, anguish, and lingering doubts about his ability to play ended with that game-winning drive.  It was a day of validation and redemption for Smith, something not lost on his teammates.

“It just shows he has the will to never quit. I’ve been here for a while with him and seen some of the things said about him,” said Niners Pro Bowl linebacker Patrick Willis.

“To see him playing the way he’s played this year, sticking with it, particularly when most would have given up and gone somewhere else … he stayed and I think God’s rewarded him now. I’m happy he is our quarterback and doing what he is doing.”

So, come next Sunday’s NFC Championship game at Candlestick Park, Niners fans can expect to see a confident and composed quarterback on the field ready to lead his team to the Super Bowl—and in doing so, create a new nickname for himself: hero.