THE BLACK MAMBA RISES: What Kobe and Batman Have In Common 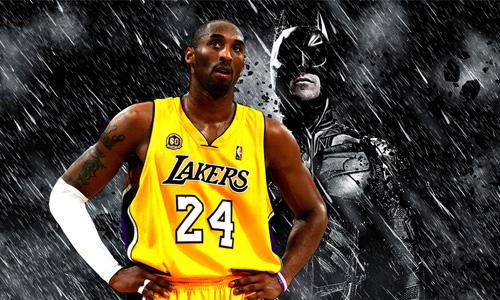 Kobe Bryant himself acknowledged during his postgame press conference that he could already hear the pundits and writers debating about whether or not the Achilles injury he suffered Friday night marked the end of his illustrious career.

When Bryant went down late in the fourth quarter, grabbing his foot and writhing in pain, you could tell from his face and the reaction of the fans at Staples Center that this was no ordinary injury.  Throughout the night, Bryant had been bruised and battered, hyperextending his left knee at one point early in the second half, and another time hobbling on his foot after coming down awkwardly after a shot.  In both instances, Bryant walked those injuries off, something he’s done routinely throughout his 17-year career.  But, when he came back onto the court to shoot free throws after suffering his then-unknown Achilles injury, you knew the reality of the situation had dawned Bryant.  He himself even vented on Facebook about whether or not this injury marked the end of his career.

When I watched Bryant talking about his uncertain future, I couldn’t help but think of Bruce Wayne’s situation in The Dark Knight Rises.  Wayne’s Batman was the hero of Gotham.  He represented the heart and soul of the city, and despite tough challenges and fierce opponents, he always came out on top.  He was the good guy, and good guys always win.

But then along came Bane, the mercenary who delivered the potentially career-ending injury to the Dark Knight.  Never before had Wayne been faced with the prospect that his body couldn’t hold up in a fight.  What’s worse, the mental toll the injury took on him proved to be just as devastating, if not more so.

Wayne was sent to a foreign prison, a pit of despair, where he came face-to-face with his own mortality.  He endured months of agonizing rehabilitation, both physically and mentally.  His body recovered in due time, thanks in large part to the prison doctor, but the mental recovery was not as easy.  Wayne stated once in the pit that, “I’m not scared, I’m angry” in regards to what happened to him and what lied ahead.  It was an important period for him; he had to learn that he wasn’t immortal, and that fighting without a fear of death wasn’t a benefit, but a disadvantage.  When Wayne was faced with the prospect that his life could end in that pit, he was filled with a newfound appreciation for his life and purpose as Batman.  And, when he finally rose from the depths and returned to Gotham, it was clear that he was beginning a new chapter in his career.  His body may not have been as strong as it once was, but his new mental toughness and appreciation for life had brought his game to a whole new level.

On his Facebook page, Bryant said of his injury, “The frustration is unbearable. The anger is rage.”  Like Wayne, Bryant has to view this injury as a chance to redefine himself and his mental approach to the game.  The road to recovery from the Achilles injury will be a pit of despair in its own right.  It’ll be one filled with days of uncertainty, of self-reflection, and likely several heated arguments with Father Time.  But Bryant has proven that if there’s one athlete who can endure this type of hardship and overcome it, it’s him.

And, just as the Dark Knight did, we will all be hoping for the day when the Black Mamba rises once again.