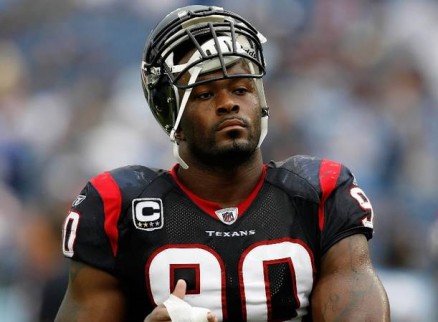 Free-agent pass rusher Mario Williams has agreed to a six-year deal with the Buffalo Bills worth up to $100M, with $50M guaranteed, according to his agent, Ben Droga.

Williams, the number one overall pick by the Houston Texans back in 2006, was one of the most coveted free-agents coming into the offseason, and despite missing 11 games last season with a torn pectoral muscle, the 6-foot-6, 285 pound defensive end has cashed in on the richest deal for a defensive player in NFL history.  His signing comes just one day after Calvin Johnson of the Detroit Lions signed the richest deal in NFL history, a six-year $132M contract with $60M guaranteed.

The signing of Williams by Buffalo is a clear sign the Bills are looking to build off their 6-10 season.  Williams will be a welcome addition to a young defense that already features talented tackles Kyle Williams and Marcell Dareus.  They now have the makings of a solid foundation on the defensive side of the ball, which will be needed to compete against Tom Brady and the New England Patriots twice a year.

If Ryan Fitzpatrick can continue to grow with the offense, the Bills have what it takes to finally contend in the AFC East, where they have spent the better part of a decade looking up from the bottom of the standings.