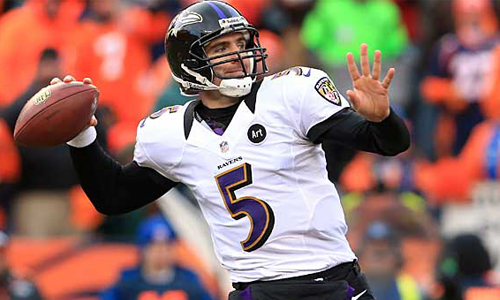 According to ESPN’s Adam Schefter, the Baltimore Ravens and have agreed to terms with Super Bowl MVP Joe Flacco on a contract that is expected to make him the highest paid quarterback in NFL history.  Terms of the deal were not immediately available.

According to Fox Sports, Flacco will sign the new contract on Monday.  This news comes just days after New England Patriots quarterback Tom Brady signed an extension that gave the team much more financial flexibility in the coming years, but Flacco’s agent, Joe Linta, told USA Today that Brady’s contract would have no effect on Flacco’s new deal with the Ravens.

Flacco and the Ravens ended contract talks prior to the start of the season, with Flacco wanting to play out the final year of his deal before negotiating.  All Flacco did during the season was lead the Ravens to a 34-31 win over the San Francisco 49ers in Super Bowl XLVII.  En route to the championship, Flacco put up historic postseason numbers, including a record-equaling 11 TD passes and zero interceptions while going 73 of 126 for 1,140 yards.  His postseason run also included wins in Denver and New England against both Peyton Manning and Tom Brady.

In 80 career games, the 28-year-old Flacco has thrown for 102 touchdowns and 52 interceptions while compiling 17,633 passing yards.