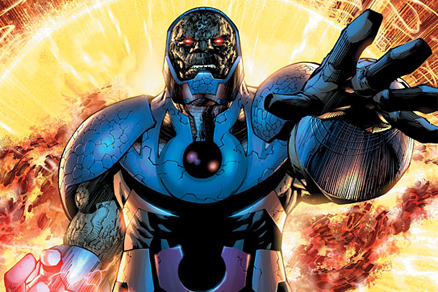 Big news here on this Monday morning.  According to Latino Review, the villain in Justice League will be DARKSEID.  For those of you who don’t know, Darkseid is the biggest and baddest villain in the DC Universe.  He’s the equivalent of Marvel’s Thanos, the villain who appeared in the post-credits scene of The Avengers and who is rumored to be the baddy in the sequel as well as in Guardians of the Galaxy.

This announcement, should it turn out to be true, is an interesting one for a few reasons.  First, as /Film rightfully points out, this move shows that Warner Bros. is throwing everything they’ve got into Justice League.  Darkseid is the best villain in the DC Universe, so the fact that they are putting him inthe first movie shows that either a.) they’ve got a great story and script in the works or b.) they are desperate as hell to keep pace with Marvel.

If you ask me, it feels more like ‘b’.  One source I spoke to who is closely connected to Warner Bros. told me the move to make this Justice League movie is being fueled primarily out of desperation and fear.  Why else would you put the best villain in the first movie?  Warner Bros. is already taking a risk by creating a Justice League movie without having set up any of the other major characters with their own films the way Marvel did. There is so much riding on this one movie to succeed, and adding a villain like Darkseid only furthers the need for this movie to do well.  I wish Warner Bros. would take a minute and realize that the way Marvel went about making The Avengers is the right way to do things.  I hope this rumor isn’t true, but it sure feels like it is.