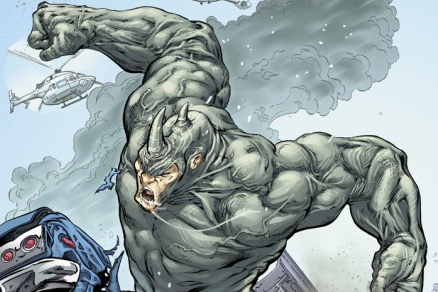 In a bit of surprising casting news, it’s being reported by multiple outlets that Paul Giamatti has entered talks to play the Rhino in Marc Webb’s The Amazing Spider-Man 2.  The star-studded cast already boasts such names as Oscar winner Jamie Foxx, who will take on the role of the villain Electro, so the addition of Giamatti will be a welcome one.  It’ll be nice seeing both stars from the film Sideways enter the world of Spidey villains–remember that Thomas Haden Church took on the role of Sandman in SamRaimi’s Spider-Man 3.

It is a bit surprising to hear that Rhino is entering the fold, but Latino Review has offered an interesting theory as to what his inclusion means for the future of the franchise.  In short, they theorize that Rhino’s addition will ultimately culminate in a showdown between Spidey and the supervillain group, the Sinister Six, of which Rhino is a part of.  It would make sense that the studio may want to take that route, since as we saw with The Avengers last summer, people love groups of heroes and villains coming together.  Whether the Sinister Six ever comes to fruition remains to be seen, but with actors like Foxx and Giamatti potentially on board for future films, it’s hard not to get excited about the prospect.

In addition to Giamatti’s rumored addition to the cast, it is also being reported that Felicity Jones has also begun negotiations for an unspecified role.  Regardless of what you thought about The Amazing Spider-Man, there’s no denying that the sequel sounds like a blockbuster in the making.