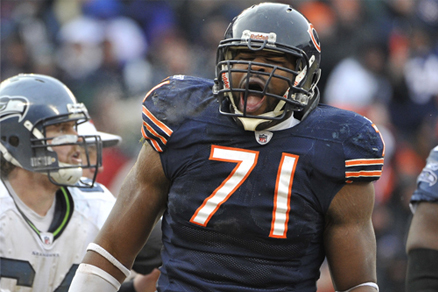 I started this website, at the behest of my wife, as a way of combining my two passions: sports and comics.  It’s been great to see that there is a niche of people who share the same interests, and what’s even better is when you meet great athletes who share the same passion too.

Israel Idonije of the Chicago Bears is one of these athletes.  While he’s probably best known for harassing opposing quarterbacks on Sundays for the Bears, Israel is also a huge comic book fan who knows his stuff and also has a great new comic book series of his own in the works entitle The Protectors.

I recently got the chance to speak with Israel and we discussed the Bears’ season so far, his thoughts on the blockbuster superhero films from this past summer, and the concept and work behind The Protectors.

TSH: You guys had a great start to the season, coming out strong Week 1 against the Colts and then struggled a bit last Thursday against the Packers.  I know its only been two games, but where do you guys see yourselves right now and what do you need to work on going forward?

IZZY: We see ourselves as still having work to do.  The season’s young, so we’re focused on just digesting things that we didn’t do so well on Thursday and then just continue to develop and grow.  I mean, we did some good things, so those things we’ll just continue to build on, but the season is a long season so we have two down.  We’ve just got to get better.

TSH: I’m not a huge fan of Thursday Night Football.  What does that do for you guys schedule wise in terms of preparation and is it something you think is good for the NFL in the long run?

IZZY: I mean, I personally—as far as physically—don’t think it’s a great idea just because you play on Sunday and your body isn’t ready.  It’s not healed enough to play on Thursday.  Just the physiology of what you do on Sunday, you’re not ready to then jump into another game Thursday, so I’m not a big fan of it from that aspect.  But, I understand that football is a business and those Thursday night games are an opportunity for additional revenue, so from the business aspect, I mean, that’s what they look at and I guess at the end of the day that’s what it’s all about.  It’s about trying to make money and generate revenue, so concessions have to be made.

TSH: Going back to Thursday’s game, a lot of people are making a big deal about the whole incident with Jay Cutler shoving J’Marcus Webb on the sideline.  Is that completely overblown and is that even an issue in the locker room?

IZZY: I didn’t even see it.  I’ve heard about it, but I didn’t take the time to go watch it or anything.  At the end of the day, guys get into altercations and then you talk about it, you resolve it as men, you move on.  I’m sure that’s the case and everything will be fine.  We’ve got to focus on winning this next game.  At the end of the day we’re all on the same team, we’re all on the same side, and we’re working together, so that’s the focus.

TSH: Jay’s been sort of an enigma since he came to the Bears.  He has good games and bad games— kind of like a Two Face-type player.  Where would you rank him among the NFL’s best quarterbacks, and do you think he has what it takes to be an elite leader for this team?

IZZY: I’m certainly not qualified to rank Jay and where he goes and where he falls as a quarterback, but I do know he has all the talent and ability to be an elite quarterback in this league.  He has all the skills and the gifts to be elite and just as he continues to grow and develop and everything comes together it’ll be great to watch him become all that he can be.  That’s what I’m looking forward to seeing.

Check back soon for part two…

Why the Patriots’ Loss to the Cardinals is a Good Thing