Yesterday, we got a great new look at Henry Cavill as Superman on the cover of Empire Magazine, and today, we have a photo of the disastrous road Superman could’ve gone down back in the ’90s.  /Film via Comic Book Movie posted pictures of Nicolas Cage in costume for the aborted film Superman Lives, which would’ve been directed by Tim Burton.

Burton’s influence on the suit is clear since it definitely evokes memories of the Michael Keaton Batman suit in Burton’s films.  I have to say, aborting this project may be the smartest move ever made in Hollywood, but what surprises me is how far along into production the project actually made it.  First off, Nicolas Cage looks nothing like Superman or Clark Kent.  The receding hairline makes the signature ‘S’ curl in his hair practically nonexistent–although it’d be cool to see them try and create an ‘S’ with a comb-over.

Suffice it to say, pulling the plug on this movie was a good idea, and at the very least it postponed a horrible Superman film from being made until Superman Returns (2006).  Hopefully, Man of Steel will give Superman the movie portrayal he’s deserved since his last great outing in Superman II (1980). 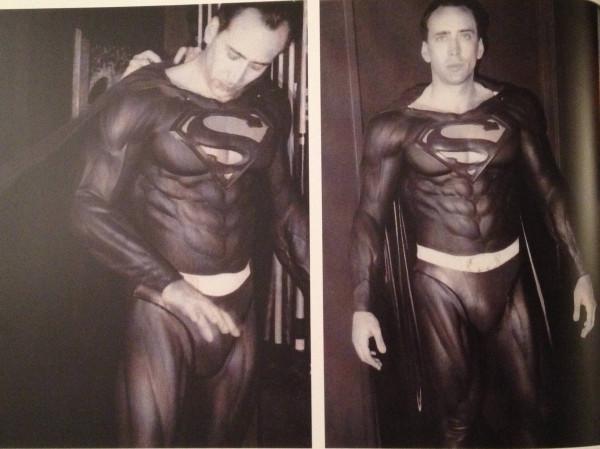