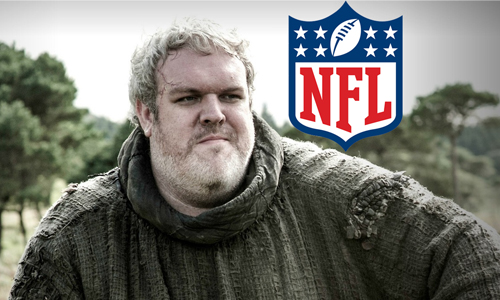 With the NFL Draft less than a week away, it feels like every other day we get an analyst’s updated Mock Draft.

A prospect had a private workout that went well? BOOM! Mock Draft 4.0, up and ready.

I’ve gotten so tired of seeing the same old names at the top of the draft board that I decided to have some fun with the NFL Draft.

What if, instead of college prospects, NFL teams could only draft characters from this season’s Game of Thrones to fill their needs?

After debating with people on Twitter (#GameOfThronesDraft), I decided to create my own Top 5 Game of Thrones Mock Draft, trying to match characters with the appropriate team.

What’s that? Tywin Lannister is an old fart?

1.) HOUSTON TEXANS: The Hound
A physical freak of nature, the Hound has the chance to be a defensive anchor for the Texans for the next decade. He’s got the size, strength, and tenacity to eat up opposing QBs. However, there is a red flag the size of Russia surrounding his attitude. At the combine he had the guts to ask a GM if his mother was a prostitute. When asked to run the 40 he told a scout, “I’ll give you 4.6 seconds to get as far from me as you can before I break you in half.” Despite all this, he might just be worth the pick here. He’s proven in battle he can withstand anything, and more importantly, he doesn’t give a damn about stats. Sure, he drinks and eats too much, but with a little time in the weight room he can be in game shape in no time.

2.) ST. LOUIS RAMS: Hodor
The Rams are in desperate need of an offensive lineman that can protect and keep Sam Bradford upright. Hodor may seem like a reach here, but in his time caring for Bran Stark he has proven he can care for someone who is always on their ass, which is where Bradford seems to be more often than not. Some teams have Hodor slipping on their draft boards after his interviews at the combine were less than impressive. He gave only one-word answers and referred to himself in the third person constantly, which some viewed as the sign of a self-centered player. However, the Rams should roll the dice here and lock up their offensive lineman of the future. He could be the next Orlando Pace, and jersey sales for Hodor would be through the roof. Keep an eye out for the New York Giants, though. They have shown an affinity for Hodor since his early playing days. It wouldn’t shock me if they traded up to this slot to grab him.

3.) JACKSONVILLE JAGUARS: Jon Snow
The Jaguars desperately need to make a splash in the draft, and what better way to do that than to select Jon Snow out of Winterfell? Despite being undersized, scouts love his work ethic and competitive drive, and his father was a well-respected player in the league until a severe head injury forced him out of the game (R.I.P. Ned Stark). Snow’s size has been questioned by some scouts, who wonder if he is the next Russell Wilson or just another Doug Flutie. Regardless, his leadership quality alone is worth the pick here at No. 3. The Jaguars could be without Justin Blackmon next season, and Chad Henne is about as reliable in the clutch as Samwell Tarly. Jacksonville desperately needs a franchise playmaker. Shahid Khan’s moustache deserves it.

4.) CLEVELAND BROWNS: Bronn
Browns owner Jimmy Haslam hits the reset button as often as a college senior hits the snooze button. The Browns owner is so ADD that it wouldn’t surprise me if he tried to implement the use of a Zack-Morris-Time-Out during games next season. After the PR hit the team took in the wake of the Rob Chudzinski firing, the owner and new GM need to make a splash in the draft. What better way to do that than to pick the multitalented Bronn? While Bronn has spent the majority of his career protecting others, it wouldn’t surprise me if the Browns move him over to the defensive side of the ball. He is strong and skilled in battle, although he has sometimes been called a dirty player. His personality would help to further toughen up an already stellar defense, and playing in the AFC North, a division known for hard-hitting defenders, seems like a natural fit.

5.) OAKLAND RAIDERS: Daenerys Targaryen
The Mother of Dragons. This woman is tough as nails and has proven time and again that she has the ability to unite a chaotic locker room, something the Raiders, and their fans, desperately need. She has the will and character to lead this franchise into the future. And don’t underestimate her. She learned the ins-and-outs of battle from the late, great Khal Drogo. But despite a great track record, there are some concerns surrounding Khaleesi. One of the red flags raised at the combine was that her entourage can sometimes get a little fiery. However risky she may seem, she’s worth the pick at No. 5. The Raiders need someone who can return this franchise to glory and get them back to the playoffs for the first time since 2002. Besides, she can’t be any worse than JaMarcus “Sizzurp” Russell, right?

Rise of a Champion