If you’ve seen Captain America: The First Avenger, you know that even after Steve Rogers’ transition into a super soldier, he was still a long way away from gaining the respect of his peers.

Instead, Rogers was forced to wear a goofy looking uniform and tour the country as “Captain America,” promoting war bonds.  He was involved in the war effort, but not in the way he’d hoped.  He was forced to watch from the sidelines, acting more like a team mascot for the US Army rather than an actual participant in the war.

When Rogers did a tour over in Italy performing for the troops, the heckling and jeering aimed at him by the soldiers made it clear that he was in the same position he was in before the super soldier procedure: ready and willing to fight, but not taken seriously.  He was a joke, a punchline.

Rogers needed an opportunity to prove his worth, and that opportunity came in the form of a covert operation to rescue US soldiers behind enemy lines.  Against the orders of Col. Chester Phillips, Rogers took it upon himself to enter a Hydra base and free the soldiers.  (For those of you who don’t know, HYDRA is a terrorist organization run by Johann Schmidt, a.k.a Red Skull)

Upon entering the base, Rogers managed to find his way to the cells where the soldiers were being held.  They all looked at this strange guy in a leather jacket, wearing a blue helmet embroidered with an ‘A’ and carrying a shield that looked like the American flag, and wondered just who the hell this guy was.  When Rogers was asked who he was supposed to be, he nonchalantly replied, “I’m Captain America.”

After Rogers freed the soldiers, he told them how to escape and where they should go to wait for him.  He was going to go deeper into the base to free anyone else he could find.  The soldiers were obviously confuse by, and skeptical of, this confident stranger in the weird getup, but Rogers wiped away any and all concerns they had about him by destroying the base and leading them all safely back to camp.

As awkward as Steve Rogers looked and felt touring the country selling war bonds, Tom Brady seemed just as awkward when he entered training camp for the New England Patriots in the summer of 2000. 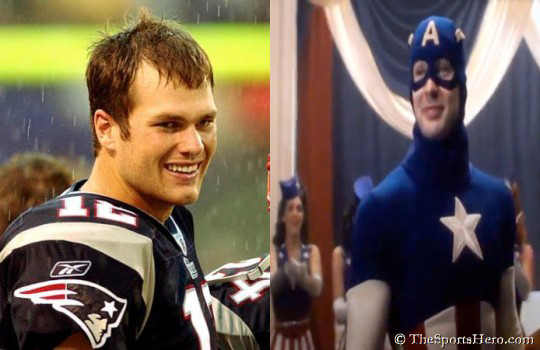 Brady entered the regular season as the Patriots’ fourth string quarterback, an unusual move since teams generally only carry three on their roster.  Brady spent his first year traveling around the country with the team, going from city to city, stadium to stadium, but seeing action in only one game, completing one pass on three attempts for six yards.   He’d made it to the NFL, but just like Rogers, was forced to watch the real action from the sidelines.

Despite seeing almost no playing time his rookie year, Brady continued to work and improve his game, and by the start of his second season he had worked his way up the quarterback depth chart from four to two.  He was the official backup for Patriots starting quarterback, Drew Bledsoe.  All Brady needed now was a chance to prove himself, and in the second game of the 2001 season, he finally got the opportunity to do just that.

In the fourth quarter of a game against the New York Jets, Bledsoe took a vicious hit from Jets linebacker Mo Lewis while running out of bounds, and suffered internal bleeding.  Brady entered the game for only one series, but was named the starting quarterback for the following week.

Although Brady’s statistics were unspectacular in his first two games as a starter–passer rating of 79.6 and 58.7, respectively, in a win against the Indianapolis Colts and a loss to the Miami Dolphins–his third game proved to be his defining moment.

Trailing 26-16 in the fourth quarter against the visiting San Diego Chargers, Brady led the Patriots down the field on two scoring drives, forcing overtime.  In OT, Brady once again marched the Pats down the field and set up the winning field goal.  For the game, Brady completed 33 passes on 54 attempts for 364 yards, and two touchdowns.

The following week, Brady again led the Patriots to victory over the Indianapolis Colts, beating them 38-17 while posting a passer rating of 148.3.

The Patriots would go on to win 11 of the 14 games Brady started that year, finishing the regular season with six straight victories and winning the AFC East for the first time since 1997, earning them a first-round bye entering the playoffs.

Although they experienced growing pains and awkward moments at the beginning of their careers, both Brady and Rogers had earned the respect of their peers, though it wasn’t easy.  Rogers had gone from a cheesy entertainer selling war bonds to a certified war hero and Captain in the army, while Brady went from fourth-string quarterback (and afterthought) to starter for the New England Patriots.  Their resiliency in the face of adversity put them in a position to succeed.

But success and leadership are two different attributes, which is something Brady and Rogers still needed to learn…