I’m not going to lie.  I’ve never been a huge fan of Captain America.  For one thing, he was a consciously political creation made during WWII for the sole purpose of invoking patriotism at home in America.  Basically, he’s the poster boy for superhero propaganda.

Then there’s his costume.  I’m not sure what to make of it.  Sometimes it looks shiny and sleek, and other times it looks like it has a feathery texture, like an eagle.  The (eagle) wings on the side of his helmet—although it doesn’t even look like a helemt—the American flag colors of his shield and uniform, and the giant star on his chest always felt a bit much.  We get it.  This guy loves America.  Hell, he probably farts the Star Spangled Banner.

Despite all these over-the-top patriotic traits, I have to admit I was psyched to see Captain America: The First Avenger.  Not only because it was the last Marvel film before the much-anticipated Avengers movie comes out next May, but also because it looked pretty damn good!

The studio did the right thing by setting the movie in the WWII era instead of the present day.  It allowed us to see Steve Rogers’ origin, and watch him go from scrawny weakling to the infamous super solider, Captain America.

The movie definitely had the look and feel of Raiders of the Lost Ark, and suffice it to say, I wasn’t disappointed.  But one thing I realized after the movie ended was that I’d seen this story before.  Not on the big screen, but on the football field.

For me, this movie could’ve easily been called Captain America: The Tom Brady Story.

It may sound ridiculous at first—since the first superhero that comes to mind when you think of Tom Brady is Superman, obviously—but trust me when I say Brady and Steve Rogers have more in common than you may think.

Each act of the movie represents as much a part of Brady’s path to greatness as it does Rogers.  Let’s break it down, starting with part 1.

PART I: A SCRAWNY START 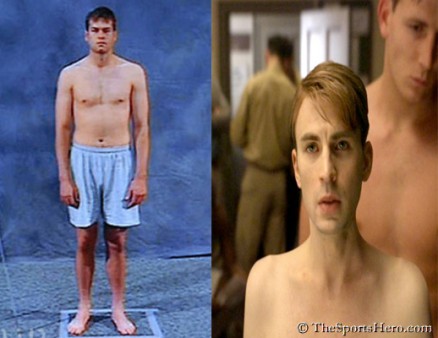 In case you were wondering, Tom Brady is the one on the left

You’ve got to go back to the beginning to see just how eerie the similarities are between Brady and Rogers.

Rogers grew up in Brooklyn, a scrawny weakling with a good heart.  He stood up for himself and never backed down from a challenge, even if it meant getting his ass kicked in an alley behind a movie theatre.  His ultimate dream was to enlist in the army and fight in WWII.  But time and time again he got turned away from recruitment centers because of his size.  He was finally given a chance and assigned to an army base, but he still had his work cut out for him.

For Brady, the path to the NFL was much like Rogers path to WWII.

At the end of the 1999 college football season, Brady had been quarterback at Michigan for four years, two as a starter.  In those two years, Brady threw for 35 touchdowns, 20 of which came in his senior year.  He also set the Michigan record for completions in a single game with 34, a record that still stands today.

But despite being a solid starter and performer on the field, he was written off by NFL scouts for his lack of mobility and arm strength, attributes considered vital for a quarterback to succeed at the NFL level.

One only has to watch this video of Brady at the 2000 NFL combine to realize why so many teams didn’t give him a second thought going into the draft.  Brady was a winner at heart, but his body had yet to catch up.  He ran about as awkwardly as “Rad Tad” Simpson at the beginning of LITTLE GIANTS.  It seemed like no team wanted to touch Brady.

In an interview this past April with Jeff Howe of NESN, Steve Mariucci, former NFL head coach who at the time of the 2000 draft was coaching the San Francisco 49ers, said that Brady was “a tall gangly kid, looked like he hadn’t ever seen a weight room.”

For Brady, working out for NFL teams and performing at the combine did little to convince coaches that he belonged at the next stage.  Said Mariucci after seeing Brady workout at a local 49ers combine, “[Tom] did nothing to make us say we needed to draft this guy.”

Rogers going through boot camp drills wasn’t much better.  He was slower and weaker than everyone else and written off by Colonel Chester Phillips, played by Tommy Lee Jones.

Quick side note: Tommy Lee Jones and Morgan Freeman are at the top of my list of “People I Want To Give Me Bad News and To Motivate Me.”  It’s got to be the southern accent.  I could listen to Morgan Freeman read recipes from a Julia Child’s cookbook and hang on every word.  Tommy Lee Jones’ gritty drawl could motivate me into jumping out of a plane without a parachute.  If it turned out I had some incurable, alien disease, and the only known cure was in the singularity of a black hole, I’d want Morgan Freeman to tell me I had the disease and then have Tommy Lee Jones motivate me into going to get the cure.  Who knows, maybe he’d even let me bring a parachute?

Now, back to the business at hand.

Brady and Rogers never listened to others around them telling them they were too weak, that they should give up.  Their drive and determination kept them going, a trait that separates the great heroes (and athletes) apart from everyone else.

But in order for Brady and Rogers to get their break, they both needed to find someone who believed in them as much as they did.

For Rogers, that man was Abraham Erskine—played perfectly by Stanley Tucci—a German biochemist and physicist who defected to the USA.  Erskine had developed a “super soldier” serum and was looking for the perfect test subject, which he found in Rogers.  Erskine tells Rogers he was picked because as a weak man, he knows the value of strength and power where as someone who’s had it all his life would likely abuse it.

The night before the super soldier procedure, Erskine makes Rogers promise him that “whatever happens…you will stay who you are.  Not a perfect soldier.  But, a good man.”

Brady’s Abraham Erskine came in the form of one Bill Belichick of the New England Patriots.  Belichick has admitted that Brady was not a phenomenal athlete, and the fact that Michigan coach Lloyd Carr didn’t make Brady the full-time starter his senior year raised some red flags.

But ultimately, Belichick saw enough in Brady to take him with the 199th pick in the 2000 draft.  In an interview with Michael Hurley of NESN, Belichick explained what it was he saw.

“The thing with Brady was really the traits: his work ethic, his intelligence, his decision-making,” Belichick said.  “I don’t think I’ve ever seen a player improve as much as Tom did. That’s certainly a big credit to his work ethic and his determination.”

Erskine and Belichick were right to put their faith into these two men nobody else wanted, but it would still take time before the rest of the world realized just how right they really were.