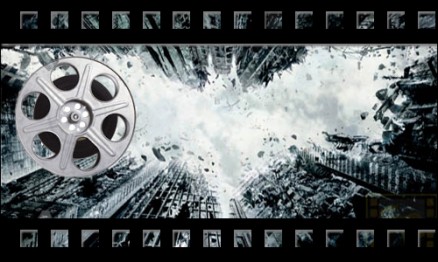 The new trailer for ‘THE DARK KNIGHT RISES’ is here at last.  I have to admit, after I first watched it, I was a little confused and, admittedly, disappointed, because after all the cool shots I was still confused about what the actual story was.  But then I watched it again.  And again.  And again.  And the more I watched it, the more I realized just how great this trailer is!  If you were confused after seeing this trailer, then good because that’s the point!  Nolan is doing his best to keep the story, and any significant details, under wraps.

So I’ll do my best to break down this trailer and offer any new insight into what might be going in TDKR.

0:13-0:14 – A weathered looking Bruce Wayne looking very much like China Bruce Wayne from ‘BATMAN BEGINS.’  In this shot he seems tired/annoyed. 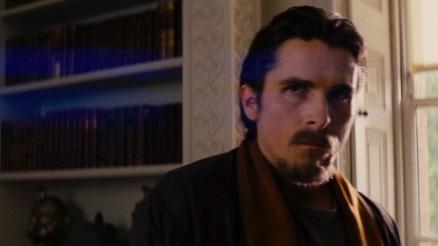 0:15-0:16 – Voice over of Selina Kyle saying, “There’s a storm coming.”  Gentle music plays throughout as we get a shot from the prologue of the League of Shadows’ plane pursuing the plane Bane and Dr. Pavel are on over the Scottish Highlands.

0:17 – Alfred walks down a hallway of Wayne Manor carrying a tray.

0:18 – Selina Kyle walking down an airport terminal.  Take a look at the image below.  She seems to be taking notice of the policeman talking to/questioning a woman.  My theory is that this is after Batman has disappeared and security around Gotham is extremely tight and Selina might be going to find Bruce and bring him back to Gotham.

0:22-0:23 – Shot of Bruce and Selina dancing at the masquerade ball.  The voice over from Selina comes from this scene.  Bruce says to her, “You sound like you’re looking forward to it.”

0:24-0:26 – Back to the prologue scene of Bane’s men jumping from their plane and (eventually) destroying the one carrying Bane and Pavel.

0:27-0:29 – Cut back to the ball and Selina responding to Bruce by saying, “I’m adaptable.”  Bruce backs away and if you look closely enough, you’ll see a brief glimpse of what appears to be the top of a cane.

0:29-0:30 – Shot of Bane’s men blowing off the back of Pavel’s plane.  Cut to Bane falling between the seats and stopping himself with arms outstretched.

0:33-0:35 – Terrified man looks at Bane while Bane holds his head close.  The man asks, “What are you?” to which Bane responds, “I’m Gotham’s reckoning.”  This scene is very similar to the one in ‘THE DARK KNIGHT’ where the Joker held Gamble’s head and asked, “Why so serious?”

0:36 – Bane stands in the tunnel of the football stadium and hits a button on his remote.  Cut to a shot of Mayor with glass exploding in his face.

0:37 – The roof of a subway tunnel begins to collapse on policemen, SWAT team members, and other city workers.

0:38 – Hines Ward running down the football field as the field under him collapses.

0:39-0:40 – Bane’s men storm what looks to be a refugee area inside a Gotham city building.  They fire their guns in the air looking to intimidate/round people up.

0:42-0:44 – John Blake stands on a bridge beside a school bus that appears to have lost control.  The look on his face is utter shock as he stares off at something.

0:45-0:50 – We get an overhead shot of city bridges exploding one by one, isolating the people of Gotham from the outside world.  It’s no wonder they shot in Pittsburgh and New York since those cities are known for their bridges.  Batman: Cataclysm, anyone?

0:56-0:57 – Cut to a bearded Bruce standing on the ledge of a pit, presumably with the prison below him.  We see shots of Bruce attempting to scale the wall.

0:59-1:06 – A startled and battered Bruce Wayne suddenly wakes up and sees Bane staring back at him.  Bruce asks, “Why didn’t you just kill me?”  Bane says, “Your punishment must be more severe.”  I’m guessing he’s telling Bruce he needs to be punished for what he did to Ra’s al Ghul in ‘BEGINS.’

1:07 – Bruce falling down the well/pit with a rope attached to him.

1:11-1:12 – Bane drops Batman’s broken cowl and walks away with water gushing behind him.

1:14-1:15 – Selina stares into what looks to be a cell, but my guess is she’s seeing Batman broken from Bane.  I’m basing this on a scene in the trailer later on, which I’ll point out.

1:16 – An overhead shot of a camouflaged Tumbler patrolling the streets of Gotham in the snow.

1:17 – Bane pushes John Blake down a hole in the ground, presumably one made by his earthquake machine.

1:18-1:19 – Cut to a stock room trading floor as people hit the ground in terror as Bane’s men open fire on the screens overhead.  A voice over from John Blake comes in saying, “Why would you run?  Bane?”

1:20-1:21 – Shot of Catwoman, not Batman, riding the Batpod through the streets.  A voice over from her comes in saying, “You should be as afraid of him as I am.”

1:22 – John Blake running through water beneath a bridge or in the sewer (likely under a bridge).

1:25 – Camouflaged Tumblers climbing the steps of the “courthouse” while explosions come from the building as people fight.

1:29 – Close up of Bane walking towards Batman.

1:30-1:31 – Cut to Alfred in Wayne Manor continuing his dialogue by saying, “I’ve buried enough members of the Wayne family.”

1:35-1:37 – Shot of Batman standing atop a bridge looking out over Gotham, his cape flapping in the wind.

1:39-1:40 – Bane walking around among a sea of fighting, presumably looking for Bats.

1:41-1:42 – John Blake holding his hands up and closing his eyes.  Continued voice over from Selina saying, “You’ve given them everything.”

1:45-1:46 – Batman and Bane fighting.  This is likely the scene where Batman is first defeated.  Again, the question is, who is the person in white standing in the background?

1:46 – Cut to Gordon and an explosion taking place behind him.

1:47 – Cut to Batman responding to Selina by saying, ““Not everything.  Not yet.”  This has to be a reference to him sacrificing his life to save Gotham.

1:48-1:49 – Shot of Batman riding the Batpod through the streets, and then cut to Commissioner Gordon outside backing up slowly and looking upwards.  The way Gordon’s hair and clothes are blowing leads me to believe the Batwing is taking off right in front of him.  Oh, yeah, and there’s a dead dude right behind him.

1:51 – An inmate walking down a row of cells does an acrobatic flip by holding onto the hand of another inmate behind bars.  There is a cop and city official behind him, so I’m thinking this scene is the beginning of the prison breakout.

1:51-1:52 – Cops and Bane’s men converge on the streets of Gotham for an epic fight.  Two Tumblers sit on both sides of the road as the groups collide.

1:54 – Batman and Bane fighting on the courthouse steps.

1:55 – Bruce and Talia al Ghul Miranda Tate making out in Wayne Manor.  It looks like they’ve been out in the rain.  Also, nothing sets the mood better than making out with the daughter of the man you killed, or rather chose not to save.

1:56 – Giant truck drives through the streets avoiding explosions and flames.

1:57 – Batman and Selina fighting together on top of a rooftop at night.

1:59 – Men on motorcycles weave their way around a truck.

2:00 – Bane doing his best impression of a crossing guard.  He may be a terrorist, but he respects the city’s traffic laws.  We also cut to a shot of an explosion underground and taking place right behind Matt Modine’s Nixon character and John Blake.  My friend Jason (@movieguy711) pointed out that Modine looks a lot like Harvey Dent in this shot, and I agree.

2:01 – Batwing firing on Tumblers as it pursues them.  We get a quick glimpse, too, of Batman holding up his new gun.

2:02 – Truck from earlier continues speeding down the streets as a Tumbler explodes next to him.  My theory is that this truck is carrying Bane’s orb and Batman is trying to stop it.

2:03-2:04 – A shot from behind of the exploding Tumbler as it comes crashing towards us.

2:12 – Shot of policemen below looking up in the sky as a strong gust of wind (or air from the engine) blows their clothes and hats.

2:13-2:16 – The Batwing flies above the city and maneuvers away from pursuing missiles.

There was a lot going on in that trailer, but here are three main things I took away.

WHAT’S THE TIMELINE?  The trailer makes it hard to determine what the actual timeline of this movie is.  How long after Bane’s arrival in Gotham does Bruce get sent to that prison?  How long is Bruce gone? And how long is Bane actually in Gotham and why doesn’t the National Guard or armed forces move in on Gotham after he blows up the bridges?  It seems Bane has a hold on Gotham and everyone in it.  We actually didn’t get a lot on him in this trailer, so I guess Nolan wants to keep him as mysterious as possible (or he’s still trying to adjust Bane’s voice in post).

JOHN BLAKE IS NOLAN’S ROBIN: I know people are speculating a lot about what JGL’s actual role is, but after seeing this trailer and the amount of attention his character of John Blake received in it, I believe now more than ever that John Blake is Nolan’s interpretation of Robin.  His interaction with Selina Kyle, asking whether “he” is dead, leads me to believe that he, too, knows Batman’s real identity, or at least will discover it early on.  While Bruce is away from Gotham, I think Blake takes the reigns and helps fight Bane the best way he can.  He may not ever be called Robin in the film, but I think Nolan has decided to interpret the boy wonder his own way in the form of John Blake.

NOT SOLD ON HATHAWAY: I trust Nolan’s decision making when it comes to his casting choices.  After all, he was the one who saw the potential in Heath Ledger and cast him as the Joker.  I, too, was shocked at the Ledger casting, but after seeing him in the trailer for TDK I was immediately convinced (and thrilled) by Nolan’s decision.  The same cannot be said for Anne Hathaway, who Nolan cast to play Selina Kyle.  The more I watch the new trailer, the more I worry that she was miscast.  I feel that every line she delivers is forced, and all I see is Princess Diaries Anne Hathaway trying to act tough and sexy.  If this is the final theatrical trailer for TDKR, it didn’t do anything to squash the fears that Hathaway won’t live up to the role.  But then again, in Nolan we trust.

BREAKING DOWN THE FILM PART I