Observations and spoilers from the ‘Batman v Superman: Dawn of Justice’ trailer 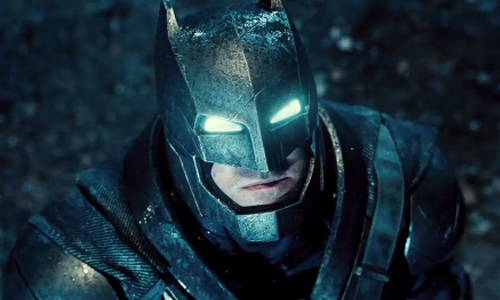 When the trailer dropped last week, I probably spent a good 30 minutes re-watching the trailer frame by frame, taking it all in and realizing that a showdown between arguably the two biggest superheroes of all-time was finally coming to the big screen.

You may not have loved the trailer as much as I did, but nonetheless, you wouldn’t be reading this piece if you weren’t somewhat intrigued by the trailer and the story.

Which leads to the main question: What is the story of “Batman v Superman: Dawn of Justice”?

For starters, the trailer showed us what we already knew about the film: the world is still coming to terms with Superman’s presence, which has created a noticeable social and cultural divide among mankind.

How Batman (and even Lex Luthor) factor into this is still anyone’s guess, but watching the trailer (again and again and again) I’ve spotted a few noteworthy moments, some of which might even divulge aspects of the story.

Now, of course, this is just my own interpretation and guess, but I did predict that John Blake was Robin in “The Dark Knight Rises” five months before it came out, so who knows? I could be right or completely full of shit, but hey, what’s the point in loving comic book movies if you can’t speculate.

All right enough from me, let’s get to it.

Hate him or love him, Superman’s on top

The world may be torn on what to make of Superman, but he definitely has a strong contingent of supporters. Real strong. Take a look at the images below. 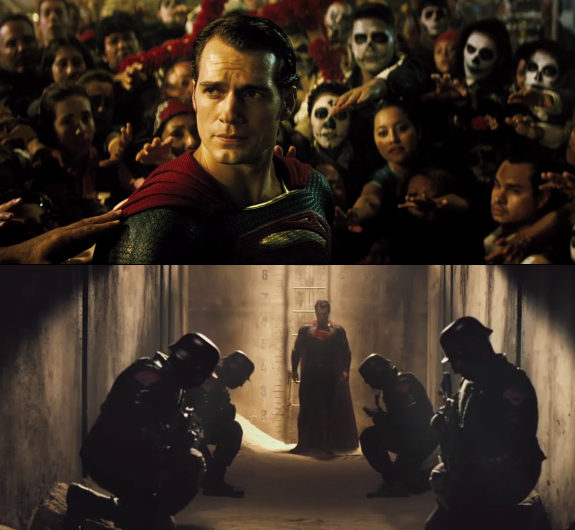 It’s clear from these images that Superman has a global reach, possibly even appearing as a god to some cultures as indicated by the top photo. The soldiers bowing before him in the second picture have the Superman emblem on their arms.

Judging by the picture, it looks like they are in some sort of ship (a boat, not an alien craft), and given the odd look of the uniforms, I’m guessing this is some sort of rogue police force acting in the name of Superman (kind of like the way Batman had copycat followers in “The Dark Knight”). I’m sure Superman disagrees with their antics, but for his detractors it is just another example of why his presence on Earth is dangerous: it inspires the wrong people to take action into their own hands.

Then there’s the above picture of Superman saving a Russian satellite or ship. At the end of “Man of Steel”, Superman told General Swanwick that he needed his help convincing Washington that he was here to help. Does part of that convincing mean working as a political pawn in some ways? (Perhaps even asked by the government to bring in Batman?) There are rumors that countries will ban Superman from their airspace, believing he sides with the Americans. Does saving a Russian satellite violate any sort of international agreements? Who polices Superman? This is where things might get interesting.

Bring in the Bat

One of the highlights of the trailer was finally hearing Jeremy Irons as Alfred. We hear him in a voiceover saying, “That’s how it starts. The fever, the rage, the feeling of powerlessness that turns good men… cruel.” 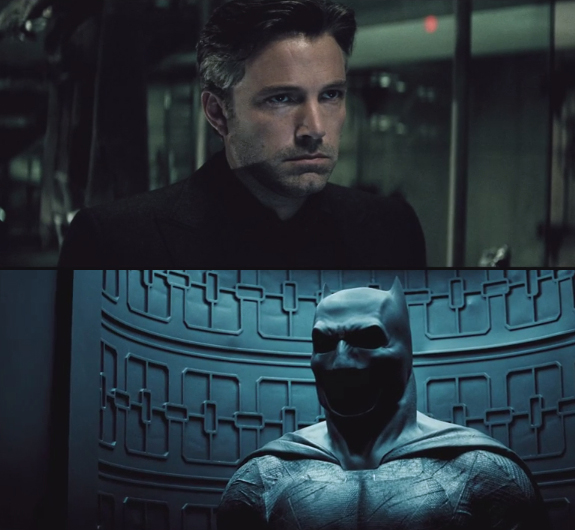 Well, if some of the rumors are true, Bruce Wayne is going to be helping Lex Luthor rebuild Metropolis since most of it was destroyed in “Man of Steel.” I feel Bruce will hear Luthor’s ramblings about how Superman is a danger to society, but not have much of an opinion either way…yet.

I suspect something happens that causes Superman to lose his cool for just a brief moment (whether he’s angry over the public backlash against him or he mishandles a rescue), but in that moment people suddenly realize just how dangerous he can be if he turns on them. As Alfred says, “That’s how it starts,” indicating that a brief outburst and the feeling of powerlessness (or, in Superman’s case, feeling like he can never do right) can cause people to turn. So, Bruce Wayne reluctantly comes out of retirement to stop the surge in crime that’s returned to Gotham upon Superman’s arrival, and to find a way to keep Superman in line should the shit hit the fan. (Albeit, I think Lex Luthor plays a major part in turning the two against each other, but I’ll get to that next time.)

We finally got our first live-action look at Ben Affleck’s Batman, and the dude is massive. No disrespect to Christian Bale, but he was never a physically imposing Batman. At 6-foot-4, Ben Affleck is the tallest and most ripped Batman yet, which is crucial when you have a mortal going up against the strongest man in the world.

What made Daniel Craig such a great and convincing James Bond in “Casino Royale” was that he not only acted like he could kick your ass, but he looked like it, too. Affleck’s Batman is the same way. Take away his gadgets and suit and he could still pummel you into the ground. Good luck, Jared Leto.

Gunning for the Man of Steel

Somehow, Batman gets his hands on kryptonite and uses it to case his armored suit with it (allegedly, of course). But how does he get his hands on it and is there anything in the trailer that indicates the presence of kryptonite?

Well, to answer the first question, I think he steals some from Lex Luthor who extracts fragments of kryptonite from the scout ship that General Zod crashed into Metropolis in “Man of Steel.” Batman steals some for himself, utilizing it on his armor, but also creating a bow/gun to shoot kryptonite darts or bullets at Superman. To answer the second question, take a look at the pictures below. 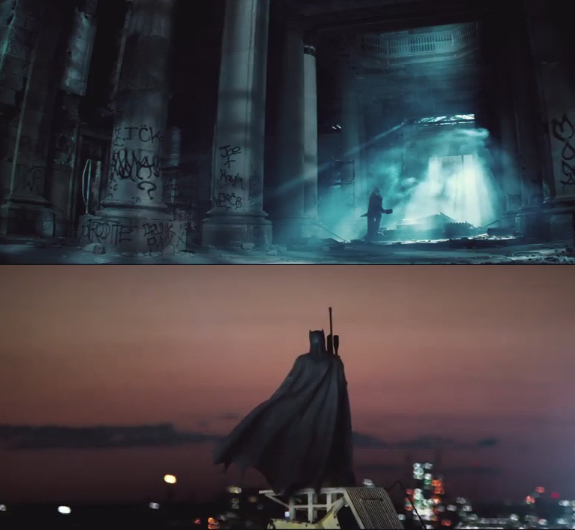 Aside from the cool Riddler question mark in the first image, the most notable thing is that Batman is holding some sort of long object. It’s not clear what the object is, but based on the second image I think it is some sort of high-tech riffle with kryptonite in it. The Nolan-esque picture of Batman shows him on top of a bridge or tower in his normal suit (notice the cowl does not look armored) and it seems like he is holding a riffle with a scope.

Granted, this could easily be a part of the structure, but if you check out this old “Batman vs. Superman” script that has been floating around the Internet for almost a decade, you’ll find that on page 101 Batman pulls out a bow with a kryptonite arrow. While the script itself was pretty bad, I think that concept will show up in “Dawn of Justice.” It’ll certainly even the playing field.

So whether or not any of these theories are accurate is anyone’s guess. And, while we only have one trailer to go by, I already think “Batman v Superman: Dawn of Justice” is set to surprise a lot of people. DC and Warner Bros. may seem like they are all over the place with their properties (which they are), but you have to believe they’ve put the time and effort into this film to make it right. After all, their entire future depends on this film’s success. No pressure, right?

Colin J. Liotta is the co-founder and Editor-in-chief of The Sports Hero and probably spent too much time analyzing this trailer but doesn’t care. You can follow him on Twitter @TheSportsHero.