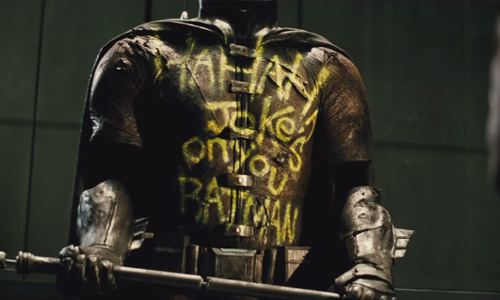 Comic-Con 2015 is the books, and it was epic to say the least. Warner Bros. dominated the event Saturday with a reveal of the Suicide Squad trailer that showed Jared Leto in all his Joker glory (creepy and psychotic as hell). But, the main buzz surrounded the new Batman v Superman: Dawn of Justice trailer that had fans everywhere cheering.

Many people felt the first trailer was a bit lackluster (I’m not one of those people), but this one delivered the goods on a number of levels. Not only did we get a great glimpse of Superman and Batman in action, but we finally got a good idea of what sets off the battle between these two soon-to-be-allies. Remember in Man of Steel when General Zod used his laser vision to cut down a building with Superman inside? Well, it turns out that building was Wayne Financial and belonged to Gotham’s most eligible bachelor. Oh, yeah, and Superman also destroyed his satellite. Check out the trailer below.

There’s a lot going on here, including our first look at Gal Gadot’s Wonder Woman in action, but the one thing that stands out most of all is the header photo, which showed Robin’s outfit hanging in the Batcave with Joker’s graffiti all over it. Clearly, this is a reference to the Batman storyline “A Death In The Family” where Joker killed Robin (a.k.a. Jason Todd). It’ll be interesting to see how this is referenced in this movie or in Suicide Squad, but suffice it to say this trailer has reignited the excitement surrounding this iconic showdown.

Colin J. Liotta is the co-founder and Editor-in-Chief of The Sports Hero and a Digital Features Editor and Writer for the NFL. You can follow him on Twitter @TheSportsHero.