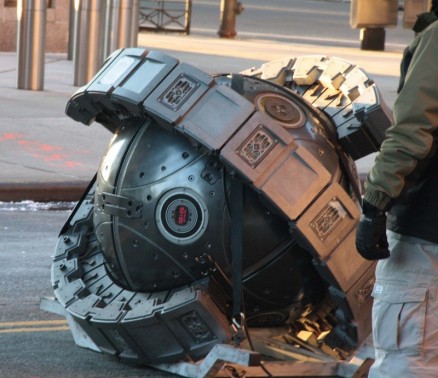 We’re less than three months away now from the release of ‘THE DARK KNIGHT RISES.’  I’ve done a lot of character analysis so far, and my last piece explored how Bane’s mask might work in TDKR.  But there is one more aspect to Bane that I feel needs to be explored.  It’s the elephant in the room: his orb.

What is this thing?  The general consensus seems to be it is some sort of earthquake machine.  Based on the scene of the collapsing football field in the trailer, there seems to be something to it.  It’s very possible, too, that for his grand finale, Christopher Nolan has taken a page out of Batman: Cataclysm.  In that storyline, a magnitude 7.6 earthquake strikes Gotham, destroying most of the city and freeing prisoners from both Blackgate Penitentiary and Arkham Asylum.  In the first TDKR trailer, we saw a group of armed prisoners escaping the prison accompanied by Bane’s men, so it’s possible the machine was used to free them.

But just how plausible is it that Bane’s orb could be used to cause earthquakes?  To help me find out, I consulted with Dr. Michael Blanpied of the USGS Earthquake Hazards Program and asked him some questions regarding the possibility of manmade earthquakes, and what his take on Bane’s orb is.  The results are very interesting and might help us shed some light on this subject.

TSH: Have you ever heard of an instance when drilling or construction has caused an earthquake?

MB: Earthquakes result from there being shear stresses acting across a fault, high enough that they overcome the stresses that are squeezing the fault together. There are three ways to change the stress such that a locked fault will move:  increase the shear stress, decrease the squeezing (“normal”) stress, or increase the fluid pressure in the fault, which acts to counteract the normal stress. In general, it takes a lot of work to change stress over the large area of fault that slips in a large earthquake. It’s theoretically possible to get lucky and tweak the stress in one place and trigger a big earthquake, but we’d have no way to know where to tweak it.

Mankind can induce the occurrence of large earthquakes in four ways, that I’m aware:

–  Filling a large volume of water behind a dam causes large changes in both shear and normal stresses on underlying faults, and may also cause water pressure to increase in a fault. Reservoir filling often results in small earthquakes and occasionally larger ones.

– Withdrawing a large volume of fluid (oil, natural gas or water) from an area (typically by pumping a number of wells over years), which can allow the overlying rock to sag down into the now-smaller formations below, which in turn changes stresses.

– Deep mining involves removing tabular sections of rock containing gold or platinum or whatever. One technique is to leave large “pillars” of rock that 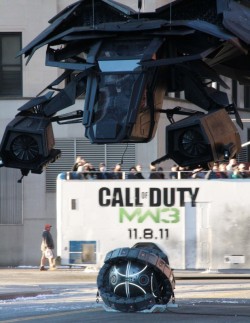 keep the ceiling held up despite the huge weight over overlying rock. Another is to allow the room to squeeze closed behind the active mining operation. Either technique causes big stress changes that can lead to earthquakes, aka rock bursts. Those can be as big as magnitude 4 or 5 or more, and can cause a lot of damage and death. South African gold mines are over 4 km deep, so the stresses (and temperatures) are very high.

– Injecting water at high pressure into deep wells can increase the fluid pressure inside a fault, allowing it to move. This big news recently, as the price of oil and gas have made profitable some mining techniques, such as fracking, that produce huge volumes of contaminated water that needs disposal, which is typically done in deep wells. Most wells are benign, but occasionally there is bad luck. Fluid is also injected in large volumes and high pressures in geothermal energy production fields; water is driven down, cracks open the hot rock that flashes the water to steam, which is piped up to run electric generators. Geothermal fields, such as The Geysers in northern California, have a lot of small, man-made earthquakes, some big enough to be felt locally. There is currently research going on but no definite knowledge of how large of an earthquake could be triggered by fluid injection, but certainly up to the magnitude 6 range under some circumstances.

– Also a fifth one that has not been demonstrated that I’m aware:  setting off a very large chemical or nuclear explosion in or near to a fault.

TSH: In comic books, there have been machines that can cause earthquakes, but is it actually possible for a machine to create an earthquake, and if so, how?

MB: The only machines that I’m aware are capable of causing earthquakes are the very large earth-moving equipment and drill rigs related to the situations listed above. I have tried to think of ways in which someone could induce an earthquake sneakily, but came up empty.

Theoretically a nuclear-scale explosion could cause an earthquake, and setting off a bomb (if you had one) could be done more sneakily than building a several-story drilling rig and operating it for weeks or months. However, we don’t have a way of measuring stress deep on faults, so it would be hard to know where to set off the bomb and whether it would be effective.

TSH: If we can’t create large earthquakes, is it possible to generate small “mini quakes” in isolated areas?

TSH: Below are two pictures of the machine that Bane uses in ‘The Dark Knight Rises’ that allegedly cause earthquakes.  Can you speculate on how a machine like this might work?

MB: I really like the look of that machine. Someone had some nice design sense.

I’d love to be able to give a useful (or at least entertaining) answer, but I can’t. If that thing had super density (like inside a star), it could cause a gravitational pull on the nearby rocks; however, we don’t know how to make something that dense.

Dr. Blanpied’s explanation of a nuclear explosion in or near a fault causing an earthquake caught my attention.  Remember from the TDKR prologue that Bane and his men kidnapped Dr. Leonid Pavel, a Russian nuclear physicist.  It’s almost a guarantee that Pavel and the orb are connected, but to what extent, we still don’t know.

Dr. Blanpied’s idea, too, of the orb being a machine that creates super density intrigued me and made me think of the opening scene of ‘MISSION IMPOSSIBLE: GHOST PROTOCOL’ when Tom Cruise escaped the Moscow prison and a machine below the prison caused the ground above to deteriorate.  I’m not sure it was a “super dense machine” but that idea makes sense in the context of Bane’s orb.  Remember that Bane’s map has different “strike zones” on it around Gotham.  Creating a massive earthquake would hit all those points, and more, at once, so it’s more likely the machine creates smaller quakes or sinkholes.

It’ll be interesting to see what the machine actually does, but I think Dr. Blanpied’s answers have given more insight into the idea of manmade earthquakes.  We know Nolan likes to keep things grounded in reality and modern science, so knowing manmade earthquakes can happen—whether through drilling or nuclear means—makes me think the earthquake theory is a strong possibility for TDKR.

Thanks again to Dr. Michael Blanpied for his help in this article.