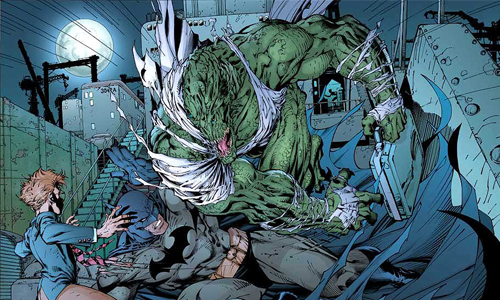 The kitchen sink has yet to be cast in David Ayer’s “Suicide Squad” movie, but we are getting pretty close to it after the latest casting announcement.

The Wrap reports that “Lost” star Adewale Akinnuoye-Agbaje (“I’d like to buy a vowel, Pat”) has been cast in “Suicide Squad” as the Batman foe Killer Croc.

The announcement itself is a bit surprising; not Akinnuoye-Agbaje’s casting, but the inclusion of Killer Croc. Akinnuoye-Agbaje was fantastic on “Lost” as Mr. Eko, and I have no doubt he’ll be a menacing presence as Killer Croc, but I’m wondering what direction Warner Bros. is going with their DC Universe.

“Man of Steel” seemed to fail in its attempt to stay grounded in reality, so is the studio doing a complete 180 and going full comic-book-mode? It might be the right move to try and move away from the look and feel of “The Dark Knight Trilogy”, but it doesn’t seem like the studio has created the proper blueprint for doing so the way Marvel did with its comic book franchises.

Killer Croc is a great villain, but does he really fit in with this new Batman? Maybe his look will be a bit more human than in the comics (meaning he just has a skin condition that gives him a scaly appearance and he isn’t a massive crocodile beast).

It’ll be interesting to see how he fits into the movie and whether he will be a major player, or if the film is simply a vehicle to set him up for future Batman films.

All I can say is that if I’m Ben Affleck, I’m probably thinking this right now about playing Batman.