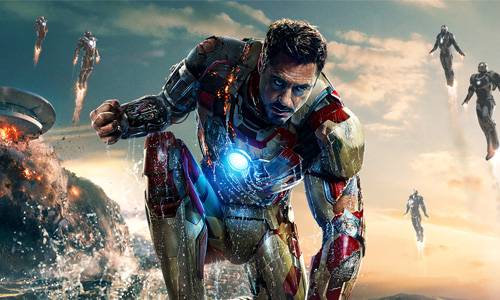 Like most of the country, I went and saw Iron Man 3 this weekend, the long awaited third installment of the franchise and the first film of Marvel’s Phase Two.  If you ask me, I was disappointed by the film.  It felt almost like a mix between Batman Forever and The Incredibles.  There were definitely memorable moments of humor, but I was disappointed with the lack of screen time for Iron Man, himself.  Sure, the focus of the film was more about Stark’s psyche and struggle, but still, for the first Marvel film post-The Avengers I felt there needed to be more action.

Regardless, the film is already a box office success, taking in over $175M in its opening weekend.  And while I didn’t enjoy it as much as I wanted to, I found there were a few specific things that really stopped me from loving this movie.

Here are five burning questions I have from Iron Man 3:

HOW DOES ALL THIS STUFF WORK?

Aldrich Killian invented Extremis to cure his own disability and that of others.  Fun side effect?  It offers you superhuman strength and the ability to generate extreme heat.  Quick question, though: how does it work?  Given that this is the Marvel Cinematic Universe, I understand that “magic” and “aliens” are no longer foreign concepts in Stark’s world, but I still feel there needs to be a little more of an explanation as to the science behind some of this stuff.  If this were a movie starring Thor, I wouldn’t second-guess it because magic and crazy shit is a part of his world, but here on Earth, not so much.  I also wanted an explanation to the remote control sensors Stark implanted into his body.  How does it work and does it have any distance limitations?  After all, it was able to make it from Tennessee to Florida in not time at all (over 800 miles).  Again, I know this is a superhero movie, and while I don’t need detailed explanations, I’d like a little more insight into some of the science.

This bothered one me the most.  First off, weren’t we supposed to get an explanation as to why Stark didn’t call the rest of the Avengers for help?  Did I miss something?  Regardless, the fact that S.H.I.E.L.D., or at the very least Nick Fury, never showed up was a real point of contention for me when it came to this movie.  In Iron Man 2, Fury showed up to see Stark after he got drunk and blew up part of his house, so why wouldn’t he send out his team of S.H.I.E.L.D. agents to try and find Stark when he was presumed dead?  Also, Captain America is just sitting around on his ass trying to figure out the 21st century and why society is obsessed with Justin Bieber.  I’m sure he’d have been more than willing to help, right?  Unfortunately, this is what comes when you create a universe where all these superheroes exist: whenever one gets in trouble, you wonder why the other heroes haven’t shown up to help.  Plus, I feel that if the President of the United States was kidnapped from Air Force One, all government agencies and agents, including S.H.I.E.L.D. and Captain America, would be scrambling to save him.  I also would’ve loved a scene where Samuel L. Jackson was on Air Force One screaming, “I have had it with these mother fucking Extremis on this mother fucking plane!”  The only excuse I can think of is that maybe Captain America: The Winter Soldier is taking place at the exact same time, so Steve Rogers has his own shit to deal with.  Maybe we’ll see a scene in that movie where he sees a story on TV about Stark being dead.  The universe Marvel has created is fantastic and unique, but they have to account for a lot these details, unfortunately.

WHAT WAS WITH THAT ENDING?

So much happened in the last five minutes of the film that it was hard to take in.  First, Stark apparently was able to fix Pepper and her condition (again, without an explanation as to how).  Also, he decided to finally have surgery to remove the bits of shrapnel around his heart.  But weren’t the bits too close to his heart for anyone to operate on?  That was the whole point of the arc reactor on his chest.  Seeing him on an operating table with Pepper and Rhodes watching as if they were witnessing a standard surgery floored me.  I understand that this might be Marvel’s way of phasing Robert Downey Jr.’s Iron Man out of their universe, but to have this surgery happen in a matter of 30 seconds was hard to fathom.  The whole film focused on Stark’s struggle for identity, so to have such an iconic moment like this surgery happen deserved more attention than it got.

When I saw Pepper appear and kick Aldrich’s ass, I was happy to see that she survived, but was skeptical as to whether or not Aldrich was actually dead.  Remember, just moments before he had been encased in an Iron Man suit that exploded with him in it!  If that didn’t kill him, I doubt an explosion like the one she created would do the trick.  Also, are we just supposed to assume that all the Extremis soldiers were killed and didn’t survive?  If they heal as well as we know they do, it is likely that a few of them survived the ordeal and would be out for revenge.

WHY DID BANNER LOOK SO OLD?

This one isn’t a big deal, but still worth pointing out.  Now I’m assuming that Iron Man 3 takes place roughly a year or so after The Avengers, maybe even less than that.  Stark is still having nightmares and anxiety over the whole ordeal, so it has to have been pretty recent.  My question then is: why did Bruce Banner have white hair already?  While the post-credits scene of Stark talking to Banner wasn’t one meant to tease a future film, it was still a great moment since the interaction and relationship the two have is hilarious.  But I couldn’t help but be shocked by the amount of white hair Banner had.  In The Avengers, his hair was thick and black (that’s what she said), but a year later it’s white?  If Banner was able to maintain his hair color after years on the run, why is it all of a sudden turning white on him?  The Hulk has incredible regenerative powers, but I guess maintaining hair color isn’t one of them.

A Theory On ‘The Man of Steel’ Fortress of Solitude

Did Batman Kill Someone In ‘Batman Returns’?